Whenever public water policy is discussed, the inevitable conclusion is the subject is too complex, has too many disparate stakeholders and defies simple solutions. This is especially true regarding partially recycled water distributed through purple pipe as opposed to recycled water to potable water standards. Usually it is decided both will be utilized.

Recycling sewage has been around since the early part of the 20th century for agricultural uses. It is only in the last half of the same ce 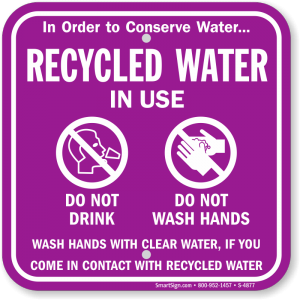 ntury, sewage has been recycled for human or potable use. Water technology has made exponential advances in just the last few decades, but those who cling to the surety of the past still promote partially recycled water for industrial and agricultural use.

While the latter position may have been good water policy when water was plentiful, the tables have turned and water is scarce. But wait, we have miles and miles of purple pipe. That is a true statement. If we were to apply the same logic to the energy business, then the advances in solar and wind energy are not viable since we have major infrastructure devoted to fossil fuels. But, you say, that is because we are looking for a reduction in CO2 and must combat climate change caused by humans.

Okay, point taken, but only if there is acceptance there is a finite amount of water available for human consumption….less than one percent of all global water. In both the climate change scenario and finite water, we are concerned with human survival.  As the drought deepens into its historic fourth year in California and more reliance is placed on rapidly depleting ground water placed there tens of thousands, maybe millions of years ago, the human needs for water become increasingly critical.

To bring the picture into focus, the question is, do we use partially treated sewage to water the medians of our freeways, or do we treat that same sewage to potable water standards? When we are teetering on the brink of having sufficient water for hydrating people, you see, it is not too complex, there are not too many disparate stakeholders and the solution is simple . Having verdant golf courses and thriving oleander in highway medians takes a very low priority, where wasting water is encouraged because it is plentiful..

Good public water policy of the 21st century will be to recycle all sewage to potable water standards. Using the Point Loma Wastewater Plant for an example, we currently dispose effluent of over two hundred million gallons per day (MGD) into the Pacific Ocean. We could reclaim half, or a hundred million gallons per day to potable water standards. But that is only about twenty percent of the current water consumption in the San Diego area.  Do we take away from that small number water for the oleanders and the grass?

No, we don’t. Good public water policy says the health and safety of the public is the first priority. So convert the current tertiary treatment plants by adding additional processes to produce potable water for direct potable reuse and abandon the ninety one miles of purple pipe. Too drastic. Not anymore drastic than abandoning coal mines, gasoline pipe lines and other fossil fuel infrastructure in favor of alternate clean energy.